Mainly, pythons, which the whole body is mottled (Python) are used.
Diamond Python with a pattern of diamond-shaped, it is especially popular.
Durable leather, has been referred to as the Hakobu Kimu rise of leather.
The difference of scale pattern, are also used, such as cobra and sea snake.
It has been used, such as in handbags. 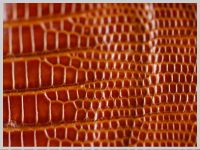 Lizard leather has been referred to as the Lizard.
There is a glossy, it is hard leather will scratch strongly lizard pattern.
A ring-shaped scales has become an indicator of luxury goods,
Ring mark Lizard in the robustness and the ring pattern, the finest leather.

Stingray leather in the leather, such as studded beads, there are have been part of the shine called only one place "Sting Ray Heart" or "star mark".
When processed into leather goods, to processed so as to take advantage of the Sting Ray heart it is common.
Referred to as the jewel of the skin, it is a high-grade leather material. In addition, moisture resistant, as is said to be six times the cowhide, is a very strong material. 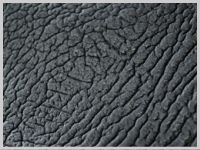 Shark leather, there is a feature that strong in a sturdy, water.
Then you come out the softness and shine enough to use.
It scales portions called shark skin, because it is removed at the processing stage, and good feel.